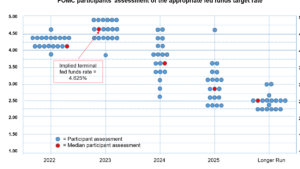 
In the face of growing pressure from policymakers and investors to pause, pivot or even cut its policy rate, the Federal Reserve on Wednesday demonstrated why its independence is the sine qua non of monetary policy.

The Fed raised its policy rate by three quarters of a percentage point, to a range of 3% and 3.25%, at the two-day meeting of the Federal Open Market Committee. At the same time, the FOMC’s forecast of rates, or dot plot, projects that the policy rate will reach 4.4% by the end of the year and a terminal rate, or peak, of 4.6% next year. The moves are designed to bring inflation back in linen with the Fed’s target of 2%. That forecast almost certainly implies another 125 basis points of hikes by the end of the year.

Those increases indicate that monetary policy will remain restrictive over the next three years, implying below-trend growth (1.8%) in the economy over that time to restore price stability.

In announcing its rate hike on Wednesday, the Fed also reduced its growth forecasts for 2022 to 2024 and increased its expectation of unemployment, which it forecast will hit a peak of 4.4% in 2023-24.

The Fed also anticipates that the personal consumption expenditures index, a key inflation gauge, will fall to 5.4% by the end of the year, and that core PCE, which strips out more volatile food and energy prices, will be 4.5%.

The Fed expects that these preferred inflation aggregates will not ease back toward its 2% target until 2025.

The Federal Reserve implied in its dot plot that it intends to follow up the September hike with another 75-basis-point increase at the November meeting and a 50-basis-point hike at the December meeting.

Those increases would bring the policy rate to a range between 4.25% and 4.5% by the end of the year.

This policy path will create the conditions for a stronger dollar and add to capital flows into dollar-denominated assets. And those dynamics, in turn, will create inflation issues among critical U.S. trade partners and most likely lead to financial stress in emerging markets.

Given the broadening out of inflation into services and housing, the Federal Reserve has little choice but to act independently to restore price stability despite the risk that it will drive domestic unemployment higher and tip a soft economy into recession.

Our research indicates that the central bank will need to move rates deep into restrictive terrain, causing an increase in the unemployment rate to 4.7% and lead to a loss of 1.7 million jobs. Those job losses would get the inflation rate back down only to 3%.

To get the inflation rate back to the Fed’s 2% goal, job losses could land well above 5.3 million and result in an unemployment rate of 6.7%, at the upper end of the range.

The peak of unemployment at 4.4% inside the Summary of Economic Projections seems somewhat optimistic given the spread of inflation out into the service sector and the fact that the three-month average annualized pace of rents is roughly 9.4%.

It is difficult to accept that, with the delayed impact of past hikes and those that the Fed is now laying out, unemployment will not move higher. Such a move would be in line with our estimate of the sacrifice ratio required to restore price stability.

To restore price stability to the economy, the Federal Reserve will almost certainty continue to push the policy rate higher next year as it continues to reduce its balance sheet, both of which will create tighter financial conditions and a slower pace of growth.

This article was written by Joseph Brusuelas and originally appeared on 2022-09-21.
2022 RSM US LLP. All rights reserved.
https://realeconomy.rsmus.com/fed-raises-its-policy-rate-by-75-basis-points-and-sees-more-increases/