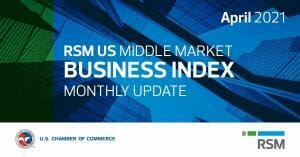 The increase in the proprietary RSM US Middle Market Business Index to 132.1 in April from 128 in March is statistically significant at a 0.05% level with seven of the 10 questions in the survey about business conditions improving over the past month. The three other questions were either unchanged or declined.

Roughly half of respondents reported an increase in revenues and net earnings in the recent quarter, which is a touch below the pre-pandemic 2019 average and is another sign of the underlying resilience inside the American middle market. The survey was taken from April 7 to April 28, before the Colonial Pipeline shutdown disrupted gasoline distribution on the East Coast.

The undeniable strength in middle market business conditions is best illustrated by the strong jump in current economic prospects over the past two months from 34% of survey respondents indicating an improvement in overall economic conditions in February to 49% in April. This is matched by the increase to 47% of respondents noting an improvement in gross revenues and 48% in net earnings in the most recent quarter.

When looking to the next six months, 74% of respondents expect an improved economy, 72% anticipate better revenues and 71% expect rising net earnings. These responses underscore the noticeably improved condition of the American real economy through the first quarter of the year, which had a 6.4% increase in gross domestic product.

Perhaps most encouraging is that 62% of survey respondents said that they intended to engage in productivity-enhancing capital expenditures over the next six months in contrast with the 35% who in April said they did so over the recent quarter. We do anticipate a hypercompetitive post-pandemic economy that will feature the pulling forward of a decade’s worth of technology into the next few years, so this is a positive development in both the long run and in the near term.

Why the near term? Because it is clear that pricing pressures associated with the reopening of the economy are at the forefront of middle market business concerns. Roughly 82% of respondents said they expect to pay more for the inputs used in their operations over the next six months, breaking the record set in last month’s survey.

Surging demand will continue to constrain supply chains, which remain impaired because of the chaos of the past year. It was clearly easier to shut down the economy than it is to reopen one. Restoring those supply chains will not be a linear process. It will be profoundly nonlinear, causing production and delivery headaches and placing additional upward pressure on prices.

While there is little argument that prices are on the rise following steep declines into the depths of the pandemic last year, they are moving back toward pre-pandemic levels, and for now, the majority of survey participants are not facing significant problems linked to inflation. Otherwise, we would be observing a much greater rate of pass-through in inflation to downstream clients.

Traditionally, early in economic recoveries, goods prices tend to increase first, followed by service costs, which compromise the overwhelming majority of the modern economy. But it is important to note that there are some ways to go before service-sector prices move back toward their pre-pandemic levels.

For example, airfare rose 10% in April and are up more than 16% compared to May 2020. Yet they are down 17% from where they were before the pandemic. This is a perfect example of price variation and volatility and not inflation. Despite an increase in prices paid at earlier stages of production and what are clear constraints in the supply of available services, whether they be commercial aircraft or hotel rooms, we are not yet ready to label this price recovery a precursor of 1970s-style inflation.

Service sector inflation, which the economy has not materially experienced since the 1980s, is driven by wage gains. The April middle market business survey tends to suggest that wage gains are restrained, but could pick up later this year.

Employment remains muted with only 39% of respondents indicating in April that they stepped up hiring in the recent quarter compared to the previous one, with 60% indicating they intend to so over the next six months. Compensation increases also remained restrained, with 39% in April noting they paid more for labor, and 64% implying they will pay more to recruit and retain labor. This denotes that service-sector inflation, which is up 2.4% on a year-ago basis, will most likely rise as it traditionally does emerging from economic downturns.

Middle market survey participants continue to carefully manage inventories with only 33% of respondents in April noting an increase in the level of existing stock during the recent quarter compared to the previous one. As one would expect given middle market anticipation of growth as the economy fully reopens later this year, 54% of respondents expect to increase inventory purchases over the next six months.

Tagged middle market business index
We use cookies on our website to give you the most relevant experience by remembering your preferences and settings. By clicking “Accept”, you consent to the use of all cookies.
Cookie settingsACCEPT
Manage consent