Donor-Advised Funds: Are They the Right Tool for Making Your Charitable Donations? 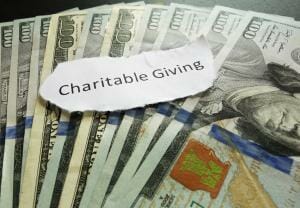 On December 22, 2017, the Tax Cuts and Jobs Act of 2017 1 (the Tax Act or TCJA) was enacted. With a goal of simplifying the tax codes, the Tax Act includes two major changes that may affect the way individuals make charitable deductions.

According to the IRS, “Generally, a donor-advised fund is a separately identified fund or account that is maintained and operated by a section 501(c)(3) organization, which is called a sponsoring organization. Each account is composed of contributions made by individual donors. Once the donor makes the contribution, the organization has legal control over it. However, the donor, or the donor’s representative, retains advisory privileges with respect to the distribution of funds and the investment of assets in the account.”

In other words, a donor-advised fund allows a donor to make a large donation to a charity that will keep the fund separate awaiting suggestions from the donor. Typically, these f funds are managed by community trusts or foundations. 2 While the assets contributed to the fund are owned and managed by the charity, the donor has the right to make recommendations on their disbursement. Generally, if the donor’s request or recommendation does not violate the Internal Revenue Code, the charity will respect and follow those recommendations.

Donors are entitled to take the deduction when made for the full donation and support desired charities over many years. If a donor generally donates $2,000 per year to various public charities, the amount may be too small to warrant itemizing deductions; instead, the donor would likely take the standard deduction. However, if the donor can make a large donation, e.g., $10,000, then the donor may be able to itemize as of the date the donation is made and then suggest the donations that the donor typically makes, which can be made over the longer period when those donations would have typically been made.

For those who want to give a bigger donation but do not know exactly where they want the donation to go or would prefer to make the donation over a period longer than one year, the donor-advised fund allows the bigger donation and resulting tax deduction as well as the ability to defer the decisions related to when and where the donation will ultimately go.

One other option that was available before the TCJA and remains available after the Tax Act is to direct that a required minimum distribution from a qualified retirement plan be directed to a public charity, but not a donor-advised fund. This option, available for up to $100,000, results in a donation to the charity and an exclusion of such amounts from the donor’s taxable income.

It is hoped for charitable organizations across the board that taxpayers will be equally charitably inclined even when there is no tax benefit inherent in the contributions. In the event, however, that tax benefits also play a role in annual giving, it makes sense to discuss donor-advised funds with your tax advisor. These funds help accomplish the goal of simplifying your tax reporting while also continuing to support your favorite charities over the long term.

If you have any questions about donor-advised funds, a professional from LaPorte’s Tax Services Group will be happy to help.

1 Public Law 115-97: To Provide for Reconciliation Pursuant to Titles II and V of the Concurrent Resolution on the Budget for Fiscal Year 2018.
2 Examples of the top the donor-advised funds for 2017, as reported by Chronical of Philanthropy, were Fidelity Charitable, United Way, and Silicon Valley Community Foundation.