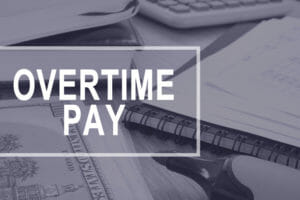 On January 1, 2020, approximately 1.2 million more U.S. workers will become eligible for overtime pay. The Department of Labor (DOL) increased the salary threshold for determining an employee’s overtime status so that fewer workers can be exempted from time-and-a-half pay. This change is coming fast, and businesses must prepare themselves now, well before the start of the new year.

Details of the New Law

The Department of Labor raised the overtime exemption salary threshold from $455 per week (appx. $23,000 per year) to $684 per week (appx. $35,000 per year). This change makes it much easier for employees to qualify for overtime. Any worker who makes less than $684 per week – regardless of duties – will be eligible for time-and-a-half overtime pay. The new threshold goes into effect January 1, 2020.

History of the Overtime Laws

Overtime benefits for non-exempt workers were first written into law when Congress passed the Fair Labor Standards Act (FLSA) in the 1930s. In the decades since, the salary threshold for determining an employee’s exempt status has not kept pace with inflation. Currently, around 7% of workers are eligible for overtime pay when in the 1970s, almost a third were covered. In his second term, President Obama sought to double the overtime exemption threshold to $913 per week (appx. $47,000 per year) and to increase that number regularly for inflation. However, just as the new law took effect, a Federal judge reversed the rule stating the DOL was exceeding its reach.

When President Trump took office, his administration introduced a revised version of the Obama-era rule. Instead of raising the threshold to $913 per week, they raised it to $684 per week with no boosts for inflation.

What This Means for Employers

Although this DOL law is not as potent as the plan that the Obama administration sought, it will nevertheless affect millions of employees and the businesses they work for. In fact, it is estimated to cost employers $300 million in additional wages each year. To reduce this financial burden, employers may want to consider a few different options.

Restaurants, nonprofits, retail establishments, and other businesses with lower-paid workers will be most affected by this law change. These changes will affect all aspects of the business. IT may need to implement new time tracking systems; payroll may need to draft new or updated time sheet protocols; accounting must be prepared to calculate overtime pay and issue paychecks timely; and employees should be given time to understand what is expected of them. The January 1st deadline is around the corner, so the time to act is now.

If you want to discuss how this overtime law may affect you, please contact a member of our LaPorte’s Accounting Services Group.