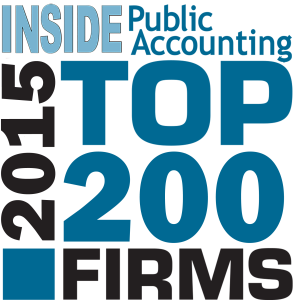 INSIDE Public Accounting (IPA), an independent national accounting newsletter, has named LaPorte CPAs & Business Advisors as one of the 2015
‘Top 200 Accounting Firms’ in the country for the sixth year in a row.

More than 500 firms participated in this year’s survey and analysis of firms. IPA based its selection of the 2015 ‘Top 200 Accounting Firms’ on firm revenue and growth, including companies with annual revenue of between $15-32.4 million and 58-235 in staff. The IPA 200 averaged 5.4% top-line growth, and 4.7% growth to the bottom line.

“We’re proud to have moved up to be the 139th largest firm in the country and to be one of only two Louisiana firms on IPA’s list of ‘Top 200 Accounting Firms’,” states William ‘Ted’ Mason, president and CEO of LaPorte. “Our firm will continue to emphasize top quality technical skills in our accounting, tax and advisory practice – complemented by industry depth and delivered by high caliber professionals,” he adds.

INSIDE Public Accounting began publishing the ‘Top 200 Accounting Firms’ in 2010. LaPorte has been named to this list since its inception. Prior to that, LaPorte was named as one of IPA’s ‘All-Star Firms’ for 2008 and 2009.

Established in 1946, LaPorte is one of the largest full-service independent accounting and business consulting firms in the region, with over 160 personnel in New Orleans, Baton Rouge and Covington, LA, and in Houston, TX.