Chart of the day: The long-term impact of a ban on Russian energy 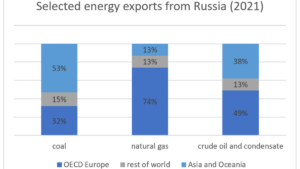 
As the war in Ukraine continues, the sanctions imposed on Russian oil and gas imports are playing a major role in the global energy crunch. But where is this impact being felt the most?

Russia, after all, was the world’s largest exporter of natural gas last year and the second-largest exporter of oil and condensates after Saudi Arabia, according to the U.S. Energy Information Administration. To replace those supplies poses a complex challenge for global energy markets. In the United States, the direct impact on supplies has been minimal because Russian oil and gas imports make up a small percentage of American energy consumption. Still, the disruption is leading to higher energy prices, which are having a major effect on inflation overall and the American economy.

It’s a different story in the European Union. Last year, the EU was the largest importer of Russian natural gas, accounting for nearly 75% of Russia’s natural gas exports regionally, according to the Energy Information Administration. Now, with the EU nations having reached a deal to phase in an embargo on Russian oil, the challenge will only grow. It’s a risky move that threatens energy stability, and consumers and businesses will inevitably pay more. We expect the embargo on Russian energy supplies to pose serious long-term challenges for the EU.

In particular, Europe is a major consumer of natural gas for manufacturing and other industrial processes. To support industry needs, a replacement for Russian natural gas is imperative.

This is no easy task. Between the complexity of moving gas around the world—there is only so much natural gas that can be shipped from North America to Europe, for example—and the lack of infrastructure for alternative energy sources at scale, reliable alternatives to natural gas are difficult to secure.

A natural gas shortage will cause the industrial sector to face challenges in keeping up with demand, requiring organizations and governments that rely on manufacturing sources in Europe to procure supplies elsewhere. Companies around the globe should factor this into their supply chain planning for the foreseeable future.

This article was written by Anne Slattery and originally appeared on 2022-06-09.
2022 RSM US LLP. All rights reserved.
https://realeconomy.rsmus.com/chart-of-the-day-the-long-term-impact-of-a-ban-on-russian-energy/