Is the Worker You Just Hired an Independent Contractor or an Employee? 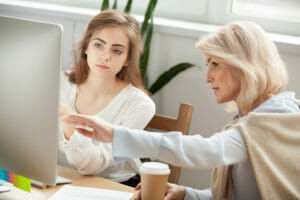 It sounds like this would be a simple question to answer – but is it? Determining your new worker’s employment status may be trickier than you realize. For years, companies working in the “gig economy” – think Uber or Postmates — have been classifying their workers as independent contractors rather than employees. But recently, we have seen some pushback from the states. In April, the California Supreme Court erected a new state-wide test to make the determination. Unlike the multifactor test the state had previously, the new “ABC” test focuses on whether the workers are providing a service that was integral to the company’s line of work. Ultimately, this test will make it difficult for companies like Uber and Lyft to classify their workers as independent contractors. Misclassifying one of your workers can have an impact on payroll taxes, income taxes, healthcare, retirement, legal standing, and safety concerns for everyone involved, so it’s best to get it right from the beginning.

Currently, the IRS makes it clear that the “economic reality” of the working relationship is the deciding factor rather than ticking off a certain number of boxes in favor of either classification. The courts will ultimately look at the following three broad categories.

Allowing workers a little bit of freedom in the workplace, like determining their own start-time or scheduling their own breaks, will not likely bump them from their employee status. But as that freedom expands, the more likely it becomes. If workers can decide for themselves–

— the courts will be much more likely to classify the worker as an independent contractor.

The courts will also look at how much financial control workers has over their own business. While there’s no precise dollar amount the courts want to see, they will consider how significant their investment is. They will look at both organizational expenses (overhead or computer equipment) and specific job-related expenses (travel accommodations or permits).

Additionally, workers who have a stake in the game are more likely to be considered independent contractors. Workers who actively work towards improving their profit stance, perhaps by negotiating different working arrangements or simultaneously recruiting new clients, show that they are independent of the company.

Relationship of the Parties

How the parties perceive each other, and how they are perceived by others, is crucial. This brings us back to the “economic reality” or the “true substance” of the situation. While describing the relationship the parties intend to create in the contract is a good idea, this might not be enough to satisfy the courts. They will also want to see:

Correctly classifying your workers is immensely important under federal law. Not only are employees protected under the Fair Labor Standards Act (FLSA), but the tax treatment will differ significantly between employees and contractors.

Organizations that misclassify the employment status of their workers are at risk. If they misclassified their worker as an independent contractor, they may be held liable for all of the worker’s back employment taxes. And unfortunately, the preferences of the parties is of no consequence; if the DOL or the IRS determines that the worker should be an employee, then that’s what they are. Plain and simple.

Even with these helpful tips from the IRS, making a final determination is tricky. If you have any questions, please contact a member of our LaPorte Accounting Services Group.