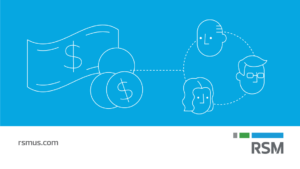 Taxpayer-friendly changes in connection with the PPP

Application of the Employee Retention Tax Credit (ERTC) was significantly expanded by the federal relief and stimulus package finalized Dec. 27, 2020. The ERTC is a refundable payroll tax credit for employers that meet certain criteria and continued to incur payroll and related costs during the COVID-19 pandemic. The changes to the ERTC could result in payroll tax refund opportunities and prospective savings—including for those companies that obtained Paycheck Protection Program (PPP) loans.


Anne Bushman, leader of RSM’s Washington National Tax compensation and benefits practice, detailed the game-changing, taxpayer-friendly revisions to the ERTC in a discussion with Matt Talcoff, RSM’s national tax industry leader. Here’s a transcript of their conversation, edited for clarity:

Matt: Let’s start with the basics: What is the Employee Retention Tax Credit?

Anne:  It is a refundable payroll tax credit that was enacted as part of the CARES Act in March of 2020.  Companies qualified for the credit if they were either fully or partially shut down due to governmental orders, or if they had a significant decline in quarterly revenue. The credit from the CARES Act is equal to 50% of payroll-related costs over a certain period of time up to a maximum of $5,000 per employee for 2020.

Matt: Perfect. I understand that the legislation enacted late last year, the Consolidated Appropriations Act, made major changes to the ERTC.  What are the big changes that we can look forward to?

Anne: That’s right, Matt. The new legislation gave us some very taxpayer-favorable changes that many companies will benefit from. The first, and maybe the biggest, change is the fact that companies that received PPP loans may also benefit from the ERTC now. Prior to this legislation, companies were not permitted to benefit from both the PPP and the ERTC.

Second, they expanded the allowable size of a company that will have wages that qualify for the credit. Under the original law, companies with 100 employees or less could include all wages paid to employees during their eligible period, but companies over that size were more limited in identifying the wages that would qualify. The recent changes increase that employee limit up to 500 employees, which dramatically expands the number of companies that will benefit from this credit.

Third, the legislation also extended and liberalized nearly every aspect of the credit for the first six months of 2021. The credit as a percentage of payroll and the definition of a significant revenue decline are both more generous now. Another big change is the maximum for wages that can be used for the credit was also increased.

Matt: Wow. Those are certainly some terrific changes for taxpayers. What about businesses that have more than 500 employees—does that mean they’re not eligible for the credit?

Anne: Not necessarily. The types of wages eligible for the credit are reduced, but employers with more than 500 employees can still take advantage of the ERTC if they have employees that are being paid but are not yet working or if they are working reduced hours.

Matt: OK. So, Anne, you mentioned earlier that a business can qualify if they were affected by shutdown orders or if they had a significant decline in gross revenues. We have seen many sectors that have been impacted by shutdowns. How should a taxpayer think about that shutdown rule?

Anne: Well, this one isn’t always as straightforward as it might seem. It’s either being fully or partially affected by a government shutdown order, which sometimes is easy to see if your business wasn’t allowed to be open for a period of time under a state or local order. But you may still be partially affected even if you were an essential business.

One example that helps people think about this is a bank. We’ve talked to some banks that were considered essential and stayed open, but they were limited by the number of people that they could have in the lobby. For the purposes of the credit, you’re not allowed to look at customers not showing up just because they chose to stay home. But in many cases, there are orders that prevented at least some amount of business from occurring. Businesses need to consider whether those shutdown orders affected them for purposes of this credit.

Matt: It sounds like it’s complicated, but it certainly could impact a number of different sectors through the industries that we see out there. That’s great.

Now, let me ask you about the PPP. As we know, a lot of taxpayers borrowed money through the Paycheck Protection Program. What should they be thinking about in terms of this employee retention credit?

Anne: This is a big one, Matt. Again, since PPP borrowers knew since the enactment of the CARES Act that they were not eligible for this credit, they likely have not evaluated whether they met the criteria. While the liberalization of some of those rules that we went through applies only to the first two quarters in 2021, this change for PPP borrowers to be able to take the credit is retroactive back to the passing of the CARES Act (on March 27, 2020).

Companies really need to work with their advisors and figure out the impact on their business of any revenue decline and government orders. If they meet the requirements, they could be eligible for the credits in 2020 that can still be claimed.

Matt: Wow, this retroactivity is big news. Are there any strategies on the application for PPP forgiveness related to the eligibility for ERTCs?

Anne: Yes, because you still can’t use the same wages for both the ERTC and for PPP forgiveness. Technically, the credit gets precedence. Obviously, getting a full-dollar PPP forgiveness is better than a partial-dollar credit, so some strategy and calculations will be helpful.

Setting aside that the definition of wages is different for both purposes, you have to think about time periods. You have flexibility in your PPP forgiveness period, so you need consider in which quarters might you have qualified for the payroll credit first—either from a shutdown or gross receipts decline—and use those periods for the ERTC.

Matt: It sounds like there’s a lot of interaction here, a lot of modeling that needs to be done. That’s very helpful.

Everyone is talking about adding liquidity, and a lot of businesses struggled in 2020 and have tax losses. Is this ERTC available to them? What if a company met all of the requirements for an ERTC but had tax losses?

Anne: Great question. Since this is a payroll tax credit, even companies with tax losses can still get some cash flow from the credit, and it’s refundable. For the 2020 year, it is possible to amend prior payroll tax filings to generate those refunds. And with the extension of the credit into 2021, companies can even apply for advance payments of their expected future credits.

Matt: So this is a nice cash flow opportunity in terms of both getting a refund from before, as well as prospective savings?

Anne: Exactly. Plus, many businesses are more focused on “above the line” or EBITDA savings—and as a payroll tax credit, that’s an added benefit here as well.

Matt: Great point. Changing gears a bit, I know some of the credit programs are fairly burdensome in terms of the information-gathering process and documentation that needs to be provided. We know that the PPP has a lot of documentation required, and it was complex. How challenging might it be to capture these benefits for these credits?

Anne: While many businesses were ineligible for the original credit due to taking a PPP loan, we still had a large number that did qualify, so we have plenty of experience in capturing the credit—and the information-gathering process is not a walk in the park. But it’s fairly straightforward for many companies.

In essence, there is the first step of determining eligibility, which you want to have documentation of. And then the second step isof identifying the wages that will qualify. The math from there is simple, and then actually claiming the credit is not very burdensome either.

Anne: I just recommend that every company revisit this program. Regardless of whether you received a PPP loan or not, the continuation and expansion of the ERTC definitely warrants some consideration. In the right fact pattern, these credits can be hundreds of thousands or even millions of dollars. We would hate to see companies miss out on any opportunities there.


This article was written by Anne Bushman, Mathew Talcoff and originally appeared on 2021-01-08.
2020 RSM US LLP. All rights reserved.
https://rsmus.com/what-we-do/services/tax/compensation-and-benefits/game-changing-updates-to-the-employee-retention-tax-credit.html

Tagged employee retention tax credit, ERTC
We use cookies on our website to give you the most relevant experience by remembering your preferences and settings. By clicking “Accept”, you consent to the use of all cookies.
Cookie settingsACCEPT
Manage consent